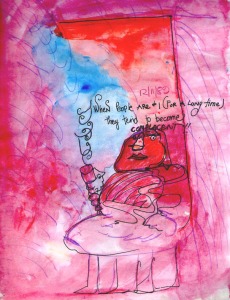 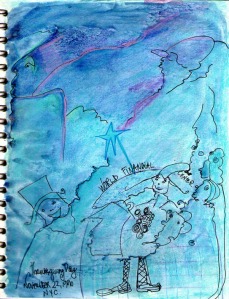 Faridi would visit children in hospitals and give them supplies to make art.  Later, Faridi would enhance those pieces with black ink, often with stunning results. 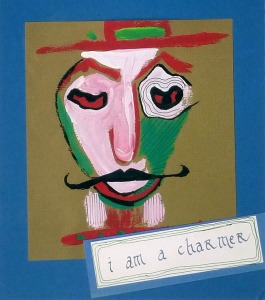 A flat “Renaldo” hat or a harmonica below the chin are often keys to recognizing a Dylan portrait.

This portrait of Elton John was made in 1975, the same year Elton won the award for Outstanding Rock Performance at the 1st Annual Rock Music Awards held in Santa Monica, California. At the time, Faridi was living in Santa Monica.

Faridi McFree was born Frieda Asmar on March 8, 1936 in Hillside, New Jersey.  She married Michael Hanft in 1961 and the two purchased a home in Bearsville, New York, a rural suburb of Woodstock.  The couple maintained an apartment in New York City as both worked for the William Morris Agency.  As a hobby in the 1960s, Faridi decorated homes and refurbished old barns – including the now famous “Midnight Ramble” barn belonging to Levon Helm.  While living in Bearsville, Faridi also befriended other members of The Band, Bob and Sara Dylan, and Albert and Sally Grossman, Dylan’s manager and his wife.  In 1970, the Hanfts moved to Santa Monica, California.  Michael began work for Merv Griffin and Mike Douglas outfits as a writer, while Faridi became swept up by the blossoming New Age and Transcendental movements.  At the time, their next-door neighbor was Jonathan Taplin, producer of the film The Last Waltz. He had previously been the road manager for The Band. In 1975, Faridi attended Taplin’s wedding, as did Bob Dylan. Shortly thereafter, Faridi began working for the Dylans.  Among her duties was teaching art to the Dylan children.  In 1977, after Bob and Sara Dylan divorced, and Faridi and Michael separated, Faridi moved in with Bob on his farm in Minnesota.  The love affair ended a year later.  Faridi spent the next few years in California, promoting her *Healing Art while working for Herman Rush, CEO of Columbia Pictures Television.  Faridi then moved to New York City where she worked for Deloitte, Haskins & Sells at One World Trade Center.  In 1982, Doubleday published her book, Celebrate You!, featuring Faridi’s artwork, affirmations and healing techniques.  In 1983, Faridi became an Interfaith Minister. She worked with the underprivileged, the terminally ill, and children from broken homes.  In 1987, William Morrow published her book, Peace on Earth Begins With You.  After a short illness, Faridi McFree passed away on August 25, 2009.

*In his 2001 book, Down the Highway: The Life and Times of Bob Dylan, author Howard Sounes writes, “Faridi had invented a concept called Healing Art.”